There was a time when I updated my whatsapp status with Dr. Dauda Lawal’s picture, which among the viewers was my Classmate during our university days at Bayero University, Kano. Sa’ad my classmate after viewing the status sent to me a message, ‘You know Dauda Lawal? He is for sure a generous person’.

After delving into discussion with Sa’ad, I came to realized that he is also from Zamfara State and surprisingly not into partisan politics. He found whatsapp not enough medium to tell me what he knew about the man Dauda Lawal, a reason why he gave me a direct phone call. My friend Sa’ad narrated more than five different stories of how Dauda directly impacted on the lives of people around him.

As a student of Sociology, there are several lenses through which we analyze social life, that’s the larger scale that view society as a whole and the micro scale that observes the relationship between individuals. It is not a magic when we give a thorough analysis of why certain persons are revered among their peers, and the opposite.

To objectively study a behavior or why people think in a certain way, you need to be conscientious pf your methods, for that would equip you with all it takes to do the needful. If you want to talk about a subject – be it human or phenomena, you must get your facts prepared.

Our society will never be emancipated unless we get rid of the ugly trend of swift generalization and haphazardly jumping to conclusion. Both dominant religions even before science had enjoined us on verifying stories/news before moving them around. When something bad had been said against an individual, the least expected of us as believers is to look for ways to verify. Many peddlers of fake news and misinformation were paid a penny to engage in the act.

For integrity sake, one must abstain from peddling rumors on someone or people he has never come across. Something within is itching you to write about Dauda Lawal or any VIP, get your facts clean. Get to know him not through the narration of his arch enemies or people that envy and are intimidated by his success.

Dauda Lawal is one humble person I ever came across in my entire life. I had never thought that there are people of his status and lifetime achievements who were as humble as what I observed in him. His generosity and kindness are second to none. The people at the surroundings of Dauda Lawal are the happiest; you can clearly witness that in their faces. His family, staff, people, and political associates are doing well. Dauda Lawal is always in a hurry to lend a helping hand, I am a living witness to that.

It is pertinent to note that the people of Zamfara State believed that Dr. Dauda is not just a politician whose sole interest rallies around occupying a political office rather, he is someone with a heart to ensure that things are moving in the right direction in Zamfara and beyond, especially in areas directly affecting the living standard of the poor and improvements in educational sector.

The massive project put forth by Dr. Dauda which was launched by Governor Bello Matawalle on the 15th of June 2019 did not just reflect in Zamfara State but rather, it reflected in the whole of Nigeria. Although such projects are meant for the continuous developments of the nation as a whole, it is however a very rare thing to witness any wealthy individual partaking in a project similar to this. The way Dr. Dauda swiftly handled the scheme conveys his deep passion for improving the lives of his people. Indeed, history will forever remember the work of this honorable man who had set an example for others to follow.

In the School of Nursing and Midwifery, his project involved building of two gigantic Student hostels for both males and females. The hostels were two story buildings comprising of four different parts. Each part has eight rooms and each room is attached with a toilet and bathroom, a kitchen with storage shelf, along with four independent and comfortable up and down beds. The female Hostel can contain 256 students while that of the Male is for 128 students. Prior to Dauda’s Projects, only 50 male and female students were being admitted in the hostel due to accommodation shortage. 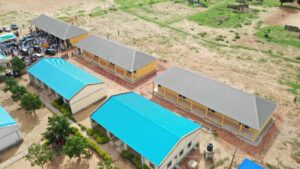 Moreover, in the College of Health and Technology Tsafe, the project covered the buildings of nine classrooms with each classroom containing sufficient number of tables and chairs as well as other learning equipment. 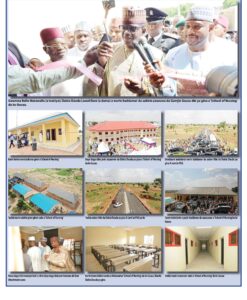 In the Federal University Gusau, the project successfully completed the building of a wide road covering an approximate distance of two and half kilometers. This was one of the main reasons why his efforts were specially praised by Governor Matawalle himself.

Before the COVID-19 pandemic I was at Dr. Dauda’s office were we discussed something thrilling about his ongoing project which if completed, will put a smile on the faces of the entire people of Zamfara state. I will break the good news when the time is due.

In a nutshell, this is the Dauda Lawal I know!